Buy, Sell or Swap on the Coin Hunter Facebook Group - join the group and post an image of the actual 2018 First World War Centenary Armistice £2 Coin you would like to swap or sell, or post to ask for this coin and give details of the price you are willing to pay or coins you are willing to swap. 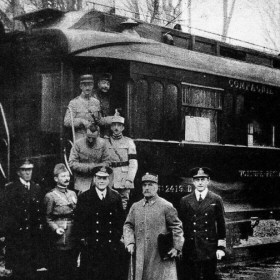 Reaching an agreement for the Armistice

Three days earlier, in the forest of Compiegne north of Paris, a German delegation had met with the allied supreme Commander Ferdinand Foch, to carry out military negotiations. The Armistice was formally signed in Foch's railway carriage on the 11th of November 1918 at 5.10am. However, the ceasefire did not officially start until 11am that day, to allow the news to travel among the troops on the Western Front. As a result, 863 British and Empire soldiers died that morning, with the total number of deaths on the Western Front reaching 2,738. 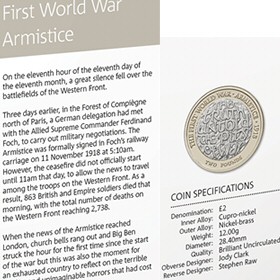 When the news of the armistice reached London, church bells rang out and Big Ben struck the hour for the first time since the start of the war but this was also the moment for and exhausted country to reflect on the terrible conflict and unimaginable horrors that had cost so many their lives.

Join the Coin Hunter community to help complete your coin collection: Join Coin Hunter free and you could find this coin using our online coin hunt app. Any coins you find and lock, including the 2018 First World War Centenary Armistice £2 coin can be yours.