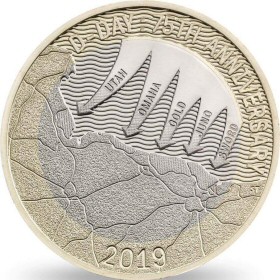 Visit the Coin Hunt eBay shop for more information about coins in the UK 2019 Annual Coin Set. The 2019 D-day 75th Anniversary 2 pound coin will be available shortly after release from our eBay shop.

Receive an email as soon as the D-day 75th Anniversary coin is available from Coin Hunter.

D-Day: The 6th of June 1944 in Normandy, France. The Normandy landings were part of World War II; Operation Overlord. The codename for D-Day was Operation Neptune, which was the seaborne invasion that began the liberation of German-occupied France.

Buy, Sell or Swap on the Coin Hunter Facebook Group - join the group and post an image of the coins you would like to swap or sell, or post to ask for the D-day 75th Anniversary coin and give details of the price you are willing to pay or coins you are willing to swap.