This page contains information about the coin struck to mark the 350th Anniversary of the Great Fire of London.You can use the coin quick links below to find key information fast.

Buy, Sell or Swap on the Coin Hunter Facebook Group - join the group and post an image of the actual 2016 Great Fire of London £2 Coin you would like to swap or sell, or post to ask for this coin and give details of the price you are willing to pay or coins you are willing to swap. 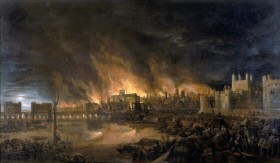 The Great Fire of London by an unknown artist

On 2nd September 1666, a fire started at a bakery on Pudding Lane. Due to the closely-built, wooden houses, it spread quickly and was soon uncontrollable. It became necessary to demolish buildings to contain the fire and help prevent it from spreading further but 13,200 houses were amongst the buildings destroyed and much of London had to be rebuilt.

This coin marking the 350th anniversary of the event shows the burning city from the perspective of someone in a boat on the Thames, trying to escape as many did during the blaze. Designed by Aaron West, it depicts flames rising high above the city, capturing the drama of the situation, and the anniversary dates and 'The Great Fire of London' around the edge. The coin carries the 5th portrait obverse design by Jody Clark, and the edge inscription 'THE WHOLE CITY IN DREADFUL FLAMES'.

Minting errors: Is there a Great Fire of London £2 coin mint error?