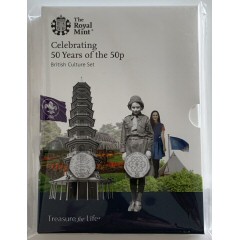 The British Culture 50 Years of the 50p set marks the half century of the seven sided fifty pence piece that first entered circulation in 1969. The 5 re-issued fifty pence designs are dated 2019 and struck to Brilliant Uncirculated quality. The Royal Mint's presentation box contains a 4 page card folder, which displays the coins and includes some releated infromation about each coin. The 50 years of the 50p British Culture set includes Kew Gardens, Scouting, Girl Guides, Roger Bannister and Britannia New 50 Pence. 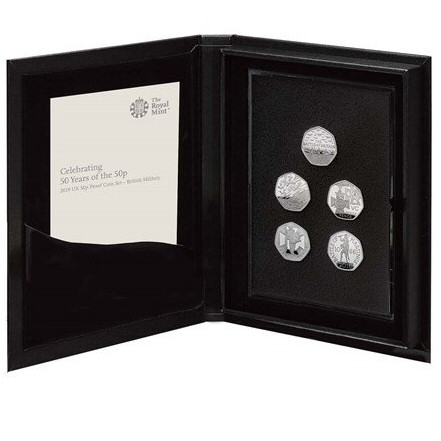 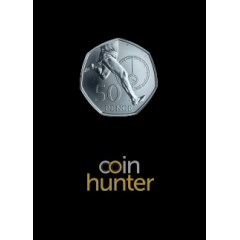 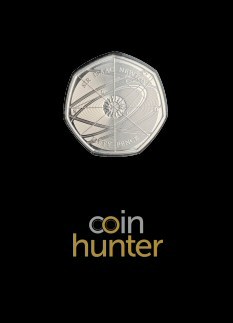 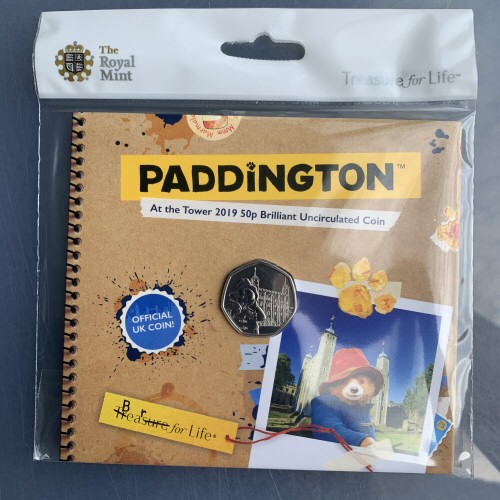 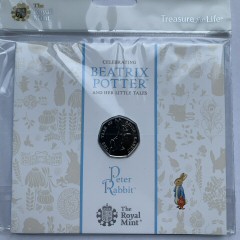 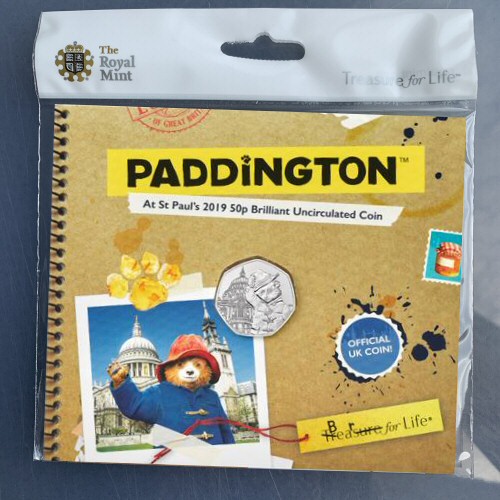 
Introduced in 1969, two years ahead of the decimal switchover, the 50p was the world's first seven-sided coin. A replacement for the ten-shilling note, the equilateral curved heptagon design wasn't just for show - it was easily distinguishable from round coins and was designed to roll smoothly in vending machines. In 1982 the inscription changed from 'NEW PENCE' to 'FIFTY PENCE' and production would continue until 1997, when a smaller sized 50p was introduced.

Released in a range of commemorative editions over the years, marking British cultural and historical highlights, the coin has sparked something of a collecting craze. The Kew Gardens 50p needs no introduction. Other sought after editions include coins commemorating the 2012 Olympic Games and the 1992 EC commemorative coin. With most in the hands of collectors, one turning up is a long shot but nothing beats the thrill of the find.

From London to Llantrisant


The sheer volume of coins required for decimalisation necessitated a move from Tower Hill to a new purpose-built site in Llantrisant, South Wales. Opened by Her Majesty The Queen in December 1968, the first copper coins required for the changeover immediately went into production. The 5p and 10p coins had already entered circulation in April. They corresponded in size and value to the old shillings and florins, making it easy to identify them as their 'decimal twins'. However, the 50p was radically different and it amplified the sense of change.


Using a 50p for the coin toss at the 1969 FA Cup and Scottish Cup finals provided some light-hearted pre-launch publicity before the awareness campaign really ramped up in the autumn. On 1 October, 50,000 posters went up in post offices, Citizens Advice Bureaux and libraries around the country, backed by £30,000 of advertising in local and national newspapers. Restrained and reassuring, the adverts explained the reasons to phase out the ten-shilling banknote and replace it with a coin.

100 Years of the Girl Guides


Inspired by the popularity of his scouting movement, in 1910 Baden-Powell asked his sister Agnes to start a similar group for girls. Through a mixture of fun, adventure and friendship, the movement has inspired each new generation to face the challenge of growing up and to be the best they can be.

The trefoil logo represents the threefold promise of the Guides - I promise that I will do my best, to be true to myself and develop my beliefs, to serve the Queen and my community, to help other people and to keep the Guide Law'.

The individual Brilliant Uncirculated 2019 Girlguiding 50p is available in a Coin Hunter card.

The 250th Anniversary of the Founding of Kew Gardens


2019 is the tenth anniversary of the release of the Kew Gardens 50p. Just 210,000 coins were released, making it the rarest 50p design in circulation today. The coin marks the 250th anniversary of the founding of this venerable institution, the country's most famous royal botanical garden. Christopher Le Brun RA's reverse design features the famous Chinese Pagoda with a decorative leafy climber twining in and around the tower.

A £5 million facelift of the Great Pagoda has recently restored Britain's first skyscraper to its former splendour - even the dragons have returned for the first time in 200 years. Originally completed in 1762 as a gift for Princess Augusta, Kew's landmark building will stand for centuries to come.

100 Years of Scouting for Boys


The scouting movement was founded in 1907 by Robert Baden-Powell, a retired British cavalry officer. He hoped to instil in boys aged 11-14 a sense of resourcefulness and a code of chivalrous behaviour. Originally a British movement, scouting took off all over the world. Today scout groups operate in 170 different countries.

Through a mixture of fun and adventure, scout leaders help equip young people with the resilience, teamwork and leadership skills they need to succeed in later life. From humble beginnings to a global movement, its traditional values are still upheld as millions of boys promise to be loyal to their country, help others and obey the scout law.

The individual Brilliant Uncirculated 2019 Scouting 50p is available in a Coin Hunter card.


On 6 May 1954 Roger Bannister made sporting history, becoming the first athlete to run a mile in under four minutes. Conditions were far from ideal and Bannister nearly called off his attempt due to the gusting crosswinds.

Careful planning made a tilt at the record possible. Led out by pacemakers Chris Brasher and Chris Chattaway, 200 metres from home, Bannister kicked for the line. Taking the tape in three minutes and 59.4 seconds, in front of 3,000 cheering spectators at the Rey Road track in Oxford, his legacy lives on as British athletes continue to break new ground, pushing themselves to the limit of human endurance.


While the shape of the new 50p piece was revolutionary, the design was anything but. Restored to the coinage of Charles II in 1672, Britannia had been a fixture on the coins of every subsequent monarch.

Competition winner Christopher Ironside's take on our most recognisable national icon - seated beside a lion, resting her shield - endured for 40 years before being replaced by Matthew Dent's definitive design in 2008. A product of the Central School of Arts and Crafts in London, Ironside was commissioned to produce designs for all of the new decimal coins and awarded the OBE in 1971 in recognition of his efforts.

The individual Brilliant Uncirculated 2019 Britannia 50p is available in a Coin Hunter card.