Buy, Sell or Swap on the Coin Hunter Facebook Group - join the group and post an image of the actual 2002 XVII Commonwealth Games (Scotland) £2 Coin you would like to swap or sell, or post to ask for this coin and give details of the price you are willing to pay or coins you are willing to swap. 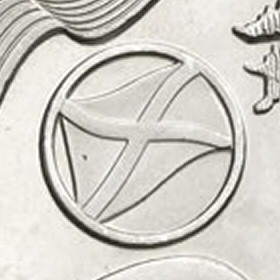 Close up of Scotland flag on the Commonwealth Games £2 coin

The Royal Mint commission a new £2 coin design to mark the event and represent each of the home nations. Commonwealth Games Scotland £2, England £2, Wales £2 and Northern Ireland £2.

771,750 of the Scottish flag design were released, making it the most common of this 4-coin series, but this is still a very low mintage.

Scotland finished 10th in the final 2002 Commonwealth Games medal table just behind Wales, having taken a total of 30 medals including 6 gold.