This page contains information about the coin struck to mark the 800th Anniversary of the Magna Carta.You can use the coin quick links below to find key information fast.

Buy, Sell or Swap on the Coin Hunter Facebook Group - join the group and post an image of the actual 2015 Magna Carta £2 Coin you would like to swap or sell, or post to ask for this coin and give details of the price you are willing to pay or coins you are willing to swap. 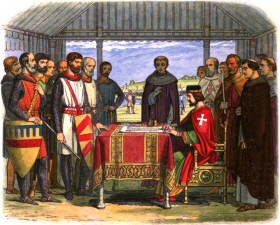 On 15th June 1215, King John signed (with a royal seal) the Magna Carta. It was essentially an agreement with the feuding barons that the King had to abide by the law too, and couldn't abuse his power. Although 'The Great Charter' has been removed and reinstated many times throughout history, it is regarded as the basis for modern law, influencing similar legislation.

The reverse of this coin created to celebrate the 800th anniversary of the event was by designed John Bergdahl. It depicts King John signing the Magna Carta, with a nobleman either side, surrounded by the words 'Magna Carta' and the key dates on the outside. The image showing King John signing it is symbolic, as he would have used a royal seal instead of a quill. The edge inscription states 'FOUNDATION OF LIBERTY', emphasising the Magna Carta's significance.

This coin was minted with the 4th portrait obverse for sets only; and all the coins produced for circulation have the 5th portrait.

Minting errors: Is there a Magna Carta £2 coin mint error?