Buy, Sell or Swap on the Coin Hunter Facebook Group - join the group and post an image of the actual 2018 Royal Air Force Centenary £2 Coin you would like to swap or sell, or post to ask for this coin and give details of the price you are willing to pay or coins you are willing to swap. 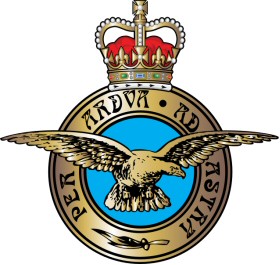 Badge of the Royal Air Force

Since its formation on April 1 1918, the Royal Air Force (RAF) has defended the skies above Britain. From the first wooden biplanes to the hi-tech supersonic jets of today, it has always been at the cutting edge of innovation, its formidable achievements marking the aviation milestones of the twentieth century. 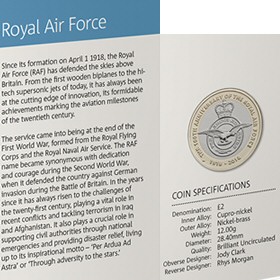 The service came into being at the end of the First World War, formed from the Royal Flying Corps and the Royal Naval Air Service. The RAF name became synonymous with dedication and courage during the Second World War, when it defended the country against German invasion during the Battle of Britain. In the years since, it has always risen to the challenges of the twenty-first century, playing a vital role in recent conflicts and tackling terrorism in Iraq and Afghanistan. It also plays a crucial role in supporting civil authorities through national emergencies and providing disaster relief, living up to its inspirational moto – 'Per Ardua Ad Astra' or 'Through adversity to the stars'.

Join the Coin Hunter community to help complete your coin collection: Join Coin Hunter free and you could find this coin using our online coin hunt app. Any coins you find and lock, including the 2018 Royal Air Force Centenary £2 coin can be yours.