Buy, Sell or Swap on the Coin Hunter Facebook Group - join the group and post an image of the actual 2002 XVII Commonwealth Games (England) £2 Coin you would like to swap or sell, or post to ask for this coin and give details of the price you are willing to pay or coins you are willing to swap. 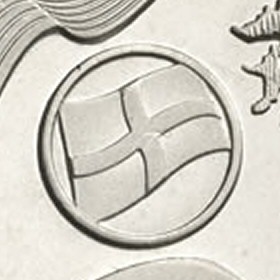 Close up of England flag on the Commonwealth Games £2 coin

The Royal Mint commission a new £2 coin design to mark the event and represent each of the home nations. Commonwealth Games England £2, Scotland £2, Wales £2 and Northern Ireland £2.

650,500 of the English flag design were released, but it can look very similar to the Northern Ireland flag coin, so make sure to check carefully.