Buy, Sell or Swap on the Coin Hunter Facebook Group - join the group and post an image of the actual 2015 First World War Centenary Royal Navy £2 Coin you would like to swap or sell, or post to ask for this coin and give details of the price you are willing to pay or coins you are willing to swap.

This £2 coin is the second in a 5-coin series remembering the First World War and celebrates the efforts of the Royal Navy and their contribution to the war effort.

With a mintage of just 650,000 this claims joint 3rd place in mintage-based rarity tables for circulating £2 coins, so finding one in your change might be harder than many other coins.

The reverse is created by David Rowlands, featuring a design based on HMS Royal Oak, one of five revenge-class battleships built for the Royal Navy during the First World War, and first deployed in 1916. All the coins struck for circulation feature the 5th portrait of the Queen on the obverse, crafted by Jody Clark.

Interestingly, The Royal Mint released 100 coins early in 2015 at the HMS Belfast visitors' centre. These featured the 4th portrait, by Ian Rank-Broadley, and were given in change to visitors in the gift shop.

This publicity stunt created a lot of buzz from the media declaring it the "rarest coin" and the 4th portrait coins soon ended up online, changing hands for more than £100. However, all uncirculated sets and packs containing this coin featured the 4th portrait, so it is by no means hard to obtain one – this has led to many being sold online as one of the 100 from HMS Belfast, with no way to authenticate it, so beware! 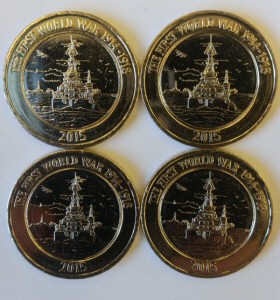 Coins on the left show the die error that looks like a flag. Image courtesy of Check Your UK Change.

Text extract and image sourced from Check Your UK Change article on HubPages.

Here at Coin Hunter we have seen at least 50 of this coin design, the "flag" error was present on just one coin, with 2 others having a small deposit of metal in the same area.

Join the Coin Hunter community to help complete your coin collection: Join Coin Hunter free and you could find this coin using our online coin hunt app. Any coins you find and lock, including the 2015 First World War Centenary Royal Navy £2 coin can be yours. 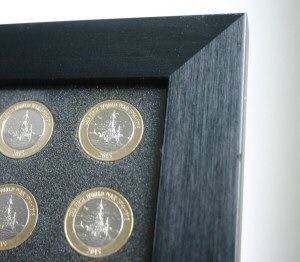 Display or store your £2 coins: Keep your First World War Royal Navy £2 Coins in an album or display frame made using our exclusive Coin Foam. Each A4 sheet holds 20 £2 or 50p coins.

Flag error
A raised mark that looks like a flag on the mast of the ship.

The Royal Mint have confirmed that this was a minting error due to the condition of the die. Something interesting to look out for on these coins, it is unknown how many of the coins have this "flag error".