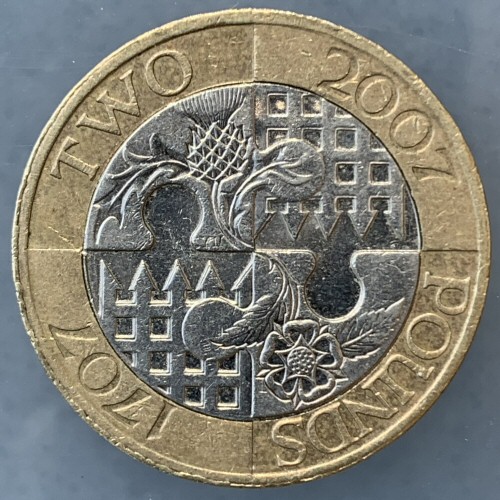 Values shown are based on recent sold eBay items, click this link for a live coin value for this coin.

Value and sell this £2 coin

For valuation purposes, the Act of Union Jigsaw £2 is known as a Face Value (FV) coin, as the collector value is close the the coin face value of 2 pounds when selling costs are taken into account.

Selling on eBay: If sold on eBay for the current high end estimate of £2.80 plus cost price postage, you would receive about £2.29 after eBay fees of £0.38 and PayPal fees of £0.13 are deducted.

2007 Act of Union £2 coins have been in circulation for 13 years, so will be in used condition. A 2007 circulated coin in excellent condition can achive a higher price, Brilliant Uncirculated (BU) versions of this coin will sell for significantly more. 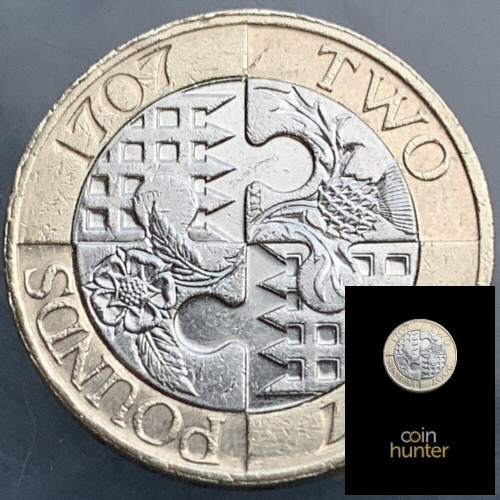 To order a Premium Circulated Circulated 2007 Act of Union £2 Coin in an exclusive Coin Hunter card for £4.99, click the add to basket button.

This is a circulated quality £2 coin that only has light circulation contact marks, selected good condition coins are cleaned to a high shine and sealed in a Coin Hunter card measuring 85mm x 61mm. The re-finished premium circulated coin is protected by a plastic blister, to keep the coin in the best possible condition.

2007 Act of Union £2 coins are often listed for sale on eBay, whether it is an example from circulation, a brilliant uncirculated coin or a precious metal presentation issued in 2007 by The Royal Mint.

View all Act of Union Jigsaw £2 coins on eBay

A selection of eBay search results are shown, click on an item to find out more.

The heads side of the coin is known as the Obverse, the tails side showing is known as the Reverse. The edge is milled (vertical line indented) with an inscription that reads UNITED INTO ONE KINGDOM.

Scarcity: 7,545,000 Act of Union Jigsaw £2 coins were minted showing the date 2007. The coins not held in private collections can be received as change today, accounting for about 1 in 110 of the two pound coins in circulation.

Writing upside down: UNITED INTO ONE KINGDOM

Writing upside down: UNITED INTO ONE KINGDOM

The inscription on the edge of the Brunel Paddington Station £2 coin reads "UNITED INTO ONE KINGDOM". The writing is upside down when the coin is heads side up.

This is NOT a minting error

On the obverse (heads) side of the coin, there are small raised dots around the edge of the silver coloured section.

On some Act of Union Jigsaw £2 coins these dots may be offset, so for example - they may appear away from the edge above the Queens head and be very close the the edge or missing from the opposite side (below the Queens neck).