Buy, Sell or Swap on the Coin Hunter Facebook Group - join the group and post an image of the actual 2011 Mary Rose £2 Coin you would like to swap or sell, or post to ask for this coin and give details of the price you are willing to pay or coins you are willing to swap. 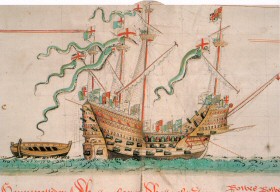 The Mary Rose as depicted in the Anthony Roll

The Mary Rose was one of Henry VIII's warships. Launched in 1511, and rebuilt in 1536, she sank in July 1545. Although the cause of sinking is still unknown, the wreck was discovered in 1971, and was raised in 1982. Artefacts were also found amongst the wreckage, such as weapons, sailing equipment and supplies. The ship is now on display at the Mary Rose Museum in Portsmouth, where she was first built.

The design of this £2 coin is by John Bergdahl, showing the Mary Rose on the sea, surrounded by stylised text of 'The Mary Rose' and the denomination. The edge inscription states 'YOUR NOBLEST SHIPPE 1511', with the obverse design by Ian Rank-Broadley.

Minting errors: Is there a Mary Rose £2 coin mint error?