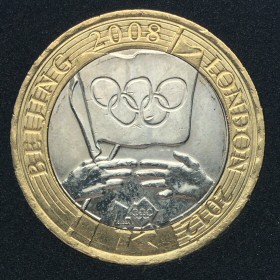 Collector Value: £5.14 is a mid-point price for 2008 Olympic Handover Ceremony £2 coins marked as sold on eBay UK. The price range for a good condition circulated example of this £2 coin is between £4.90 and £5.28.

Scarcity: 918,000 Olympic Handover London Beijing £2 coins were minted showing the date(s) 2008. The coins entered circulation and can be received as change today, accounting for about 1 in 1371 of the two pound coins in circulation.

Buy: 2008 Olympic Handover Ceremony £2 coins are often listed for sale on eBay, whether it is an example from circulation, a brilliant uncirculated coin or as a precious metal presentation issued in 2008 by The Royal Mint.

Items matching a search for Olympic Handover London Beijing 2 coin are shown below:

Sell: The Olympic Handover London Beijing coin is in demand and should not be spent at face value. If sold on eBay for the current high end estimate of £5.28 with cost price postage, envelope etc of £1, you would receive about £4.44 after eBay fees of £0.63 and PayPal fees of £0.21 are deducted.

Errors: 0 errors confirmed by The Royal Mint. Follow this link an scroll to the bottom of the page to read about Olympic Handover London Beijing Coin "Non-Errors" or find out more about general coin errors.