This page contains information about the coin struck to mark the 400th Anniversary of the death of William Shakespeare and depicts an image to represent his represent his plays (Tragedies).You can use the coin quick links below to find key information fast.

CONFIRMED COIN ERROR The edge inscription on this coin should read "WHAT A PIECE OF WORK IS A MAN", but some coins have the inscription "FOR KING AND COUNTRY" that was used for a different £2 coin. Check the edge of your coin, if it says "FOR KING AND COUNTRY" - it is a Shakespeare Tragedies (Skull) £2 error coin that could be worth one twenty times face value. (£40)

Buy, Sell or Swap on the Coin Hunter Facebook Group - join the group and post an image of the actual 2016 Shakespeare Tragedies £2 Coin you would like to swap or sell, or post to ask for this coin and give details of the price you are willing to pay or coins you are willing to swap. 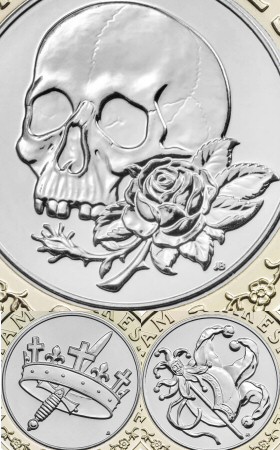 The William Shakespeare £2 coins were issued in 2016 to mark the 400th anniversary of his death.

The set of 3 coins include Histories, Comedies and Tragedies as a reference to the genre of plays written by Shakespeare.

The Skull £2 coin as it is often known was created to represent Shakespeare's Tragedies and includes the start of a well know quote from a play called Hamlet on the coin edge: WHAT A PIECE OF WORK IS A MAN.

The coin shows a prop from the play, a human skull and a rose. It is the most common of the 3 coins with a mintage of 5,695,000 so should not be too hard to find in your change.

If this coin eludes your change checking efforts, the £2 coin can be purchased for £5 plus £2.99 postage from The Westminster Collection.

Minting errors: Is there a Shakespeare Tragedies £2 coin mint error?