Buy, Sell or Swap on the Coin Hunter Facebook Group - join the group and post an image of the actual 2013 Anniversary of the Guinea £2 Coin you would like to swap or sell, or post to ask for this coin and give details of the price you are willing to pay or coins you are willing to swap. 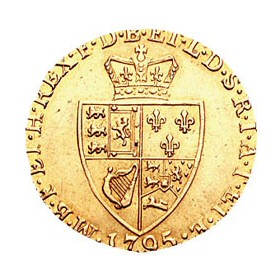 The guinea was first minted in 1663, being worth £1 and made of gold from the Guinea area of West Africa (hence the name). As the value of gold rose, the value of one guinea varied greatly but after decimalisation had a fixed face value of £1.05. The last guinea was struck in 1814.

In 2013, it was 350 years since the first guinea was minted, and so a £2 coin was created to mark the event. Anthony Smith designed the reverse, showing the arms of King George III which became known was the Spade Guinea due to its resemblance of a garden spade. This is surrounded by an inscription of "Anniversary of the Golden Guinea" and the year on the outer ring. The edge inscription states "WHAT IS A GUINEA? 'TIS A SPLENDID THING", a phrase from writer Stephen Kemble. The 4th portrait by Ian Rank-Broadley is used on the obverse. 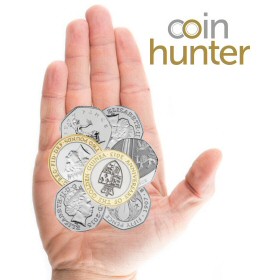 Join the Coin Hunter community to help complete your coin collection: Join Coin Hunter free and you could find this coin using our online coin hunt app. Any coins you find and lock, including the 2013 Anniversary of the Guinea £2 coin can be yours.

Minting errors: Is there a Guinea £2 coin mint error?