This page contains information about the coin struck to mark the 400th anniversary of the Gunpowder Plot.You can use the coin quick links below to find key information fast.

Buy, Sell or Swap on the Coin Hunter Facebook Group - join the group and post an image of the actual 2005 Gunpowder Plot £2 Coin you would like to swap or sell, or post to ask for this coin and give details of the price you are willing to pay or coins you are willing to swap. 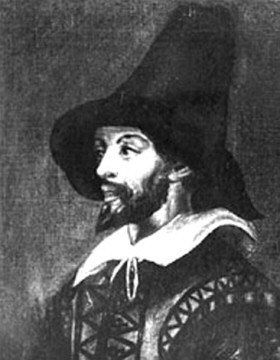 The 1605 Gunpowder Plot was a failed assassination attempt on King James I. Guy Fawkes, with his group of conspirators planned to load the basement of the House of Lords with gunpowder and set it off during the opening of parliament on 5th November 1605.

An anonymous letter was sent to one of the members of the House of Lords, exposing the plot. A search was made of the House of Lords, and Guy Fawkes was caught setting up the gunpowder. Others in the group fled when they heard Fawkes had been caught. Eight of the survivors were caught (including Fawkes) and were sentenced to be hanged, drawn and quartered.

The King celebrated by having a bonfire, which has evolved into the Bonfire Night which we still celebrate today. In 2005, a £2 coin was issued to celebrate the 400th anniversary of this event.

The reverse design by Peter Forster shows symbols of the state - swords, maces and crosier – arranged in a circle, much like a Catherine Wheel firework. The stars around the edge of the coin also allude to the firework celebrations we have today. The obverse features the 4th portrait by Ian Rank-Broadley. The edge inscription states "REMEMBER REMEMBER FIFTH OF NOVEMBER" the rhyme which arose with bonfire celebrations. 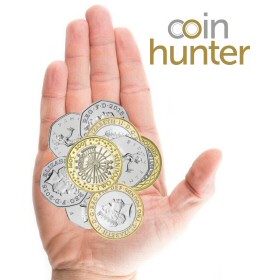 Join the Coin Hunter community to help complete your coin collection: Join Coin Hunter free and you could find this coin using our online coin hunt app. Any coins you find and lock, including the 2005 Gunpowder Plot £2 coin can be yours. 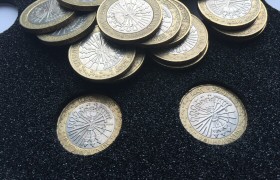 Display or store your £2 coins: Keep your Gunpowder Plot £2 Coins in an album or display frame made using our exclusive Coin Foam. Each A4 sheet holds 20 £2 or 50p coins.

You could keep your spare Gunpowder Plot coins together without having to keep them in a coin bag. Coin foam can be used to organise your collection and your spares, whist avoiding damage that can occur when coins knock together. Order A4 sheets from the Coin Hunter Shop.

Minting errors: Is there a Gunpowder Plot £2 coin mint error? 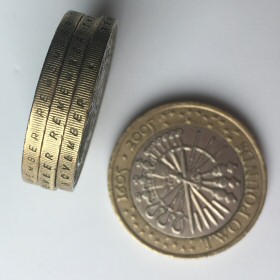 Part of edge letter missing
The inscription on the side of the coin seems to have the letter P where a letter R should be. For example PEMEMBER PEMEMBER FIFTH OF NOVEMBEP.

This is not a minting error, the tail of the capital R will often line up with a line on the milled egde of the coin. So it cannot be seen clearly and makes a letter R look like a letter P.