Buy, Sell or Swap on the Coin Hunter Facebook Group - join the group and post an image of the actual 2012 Handover to Rio £2 Coin you would like to swap or sell, or post to ask for this coin and give details of the price you are willing to pay or coins you are willing to swap. 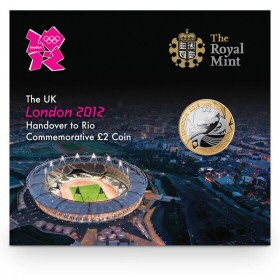 The London 2012 Olympic games finished with the closing ceremony, in which Rio received the Olympic flag in the handover. This marked the end of the Olympic games in London, and the start of Rio's responsibility to carry on the games, in 2016.

The reverse design (by Jonathan Olliffe) of this £2 coin shows a baton being passed to symbolise the handover, accompanied by flags from both the United Kingdom and Rio. A running track is shown below and the London 2012 logo is above this. The words "London 2012" and "Rio 2016" are seen on the outer ring of the coin. Ian Rank-Broadley's 4th portrait obverse design is used.

The edge inscription "I CALL UPON THE YOUTH OF THE WORLD" is part of the speech made by the International Olympic Committee President made at the end of each Olympic games, closing the current games and calling upon the youth of the world to "assemble four years from now" in the next host country.

With a mintage of 845,000, this is a very collectable coin and circulated could be worth up to 4x face value. 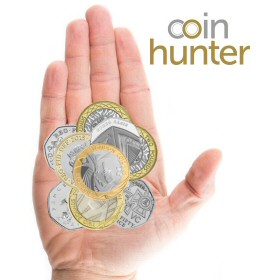 Join the Coin Hunter community to help complete your coin collection: Join Coin Hunter free and you could find this coin using our online coin hunt app. Any coins you find and lock, including the 2012 Handover to Rio £2 coin can be yours.

Minting errors: Is there a Handover to Rio £2 coin mint error?