This page contains information about the coin struck to mark the 250th Anniversary of the birth of Robert Burns.You can use the coin quick links below to find key information fast.

Buy, Sell or Swap on the Coin Hunter Facebook Group - join the group and post an image of the actual 2009 Robert Burns £2 Coin you would like to swap or sell, or post to ask for this coin and give details of the price you are willing to pay or coins you are willing to swap. 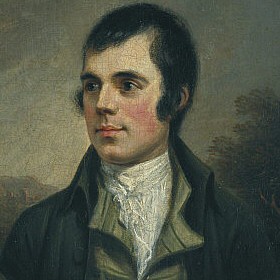 Robert Burns was born 25th January 1759 and died 21st July 1796 (aged just 37). He is often associated with Scotland, with many claiming him as the national poet. He is known for writing with a Scottish dialect, but also created poems and songs in standard English, often commentating on politics. Today his work has an influence on Scottish literature, and on 25th January every year his life and work is celebrated.

This £2 coin marks the 250th anniversary of Burns' birth and was the first UK coin to feature a design based only on handwriting. An extract from "Auld Lang Syne" is shown, with key dates and the denomination surrounding it on the outer ring of the coin. This reverse design is by the Royal Mint Engraving Team and is used with Ian Rank-Broadley's obverse design. The edge inscription states "SHOULD AULD ACQUAINTANCE BE FORGOT". 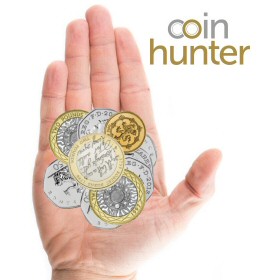 Join the Coin Hunter community to help complete your coin collection: Join Coin Hunter free and you could find this coin using our online coin hunt app. Any coins you find and lock, including the 2009 Robert Burns £2 coin can be yours. 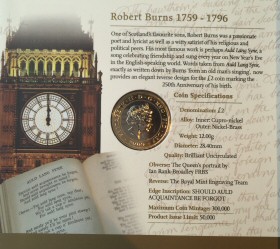 Extract from The Royal Mint presentation folder:
One of Scotland's favourite sons, Robert Burns was a passionate poet and lyricist as well as a witty satirist of his religious and political peers. His most famous work is perhaps Auld Lang Syne, a song celebrating friendship and sung every year on New Year’s Eve in the English speaking world. Words taken from Auld Lang Syne as written down by Burns "from an old man's singing", now provides an elegant reverse design for the £2 coin marking the 250th Anniversary of his birth.

Minting errors: Is there a Robert Burns £2 coin mint error?